Even though many of you probably belong to a knitting club, have you ever thought about yarn bombing?

Making something to leave in a public place for others to find? An unexpected knit?

Yarn bombing started off in the US and has since become a worldwide thing. 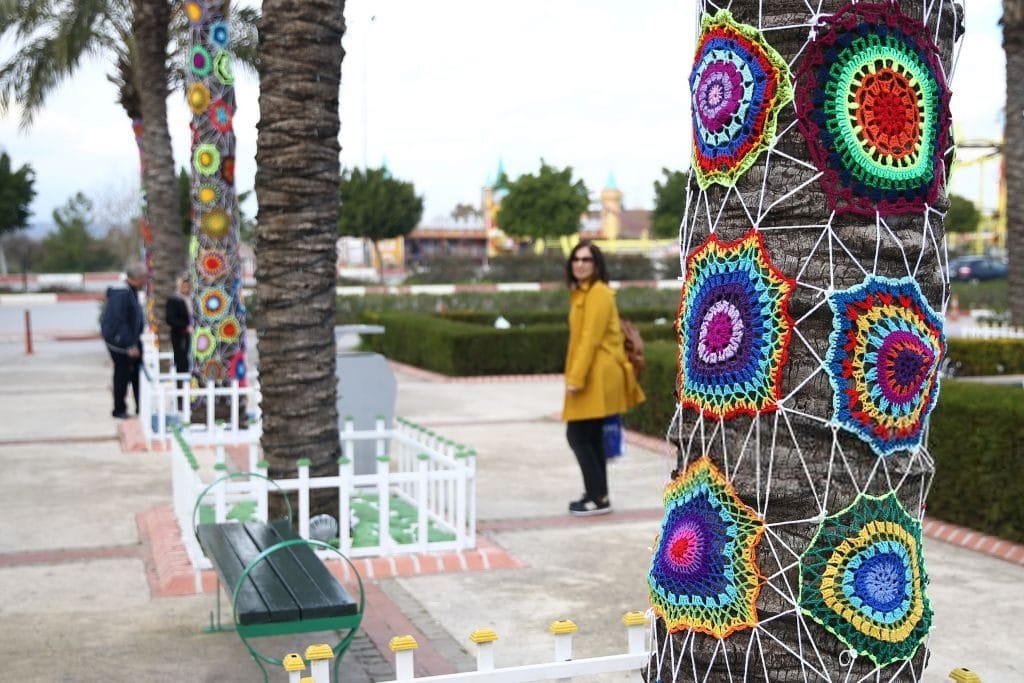 People who join knitting or crochet groups often group together to work on a project that can benefit their community and/or send a message. 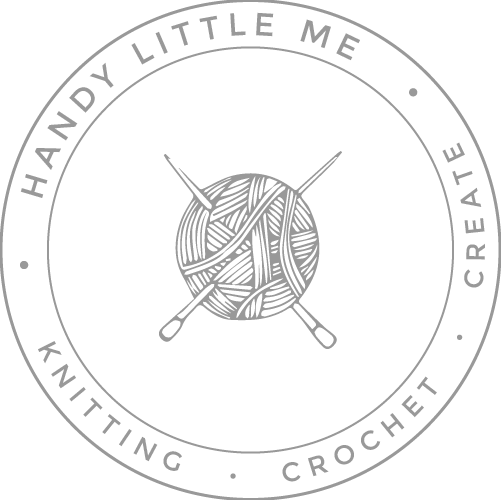 Some may see it as a form of graffiti, but really most yarn bombers do seek permission beforehand, so that their work can stay in place for a few days, to get some recognition and shares on social media. 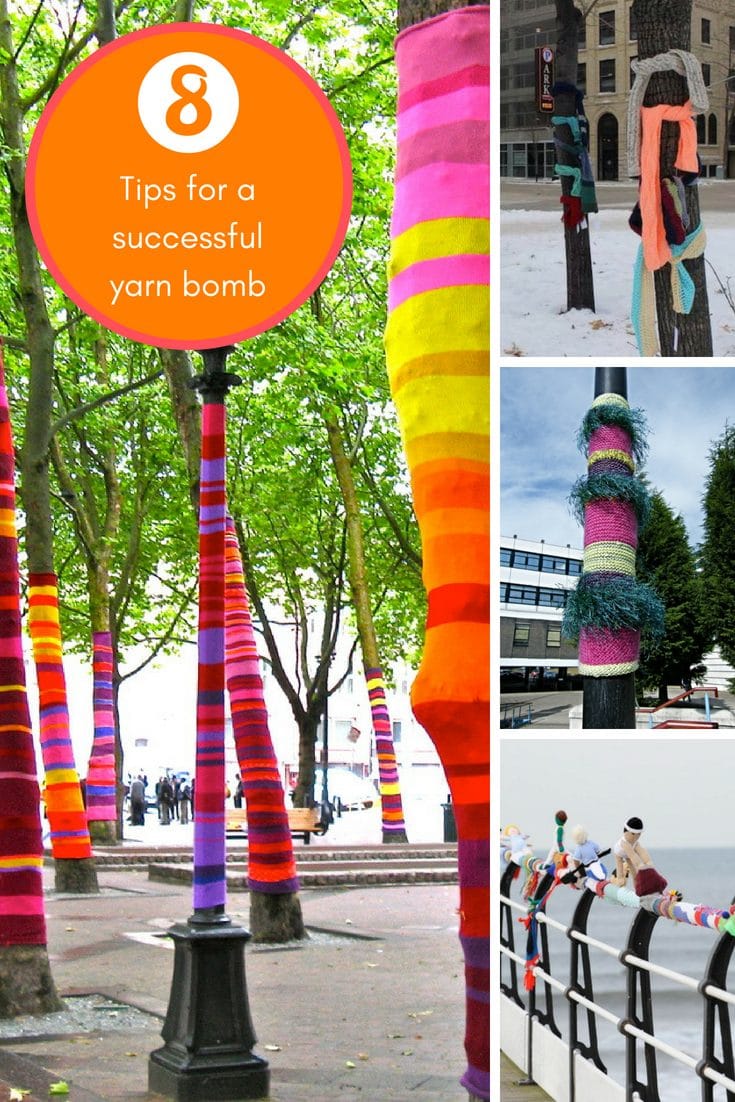 The installations normally get taken down by the people who put them up, taking care to wash them and use them again, some work even goes on tour!

There have been many yarn bombing collaborations too – with famous artists, designers and craftspeople getting involved with local crafters to create something awesome for everyone to enjoy.

Most people enjoy seeing a yarn bomb, enjoying the idea that someone has left something fun in a public place, from putting a colourful sweater on a statue, leaving crochet flowers on railings or covering a nursery school gate in little amigurumi animals.

A great way to get started in yarn bombing is to start a knitting club!

I started a lunchtime club at the college I was working at and it had quite a few members, they would bring lunch, we would gossip and it was so much fun!

It’s best to get others involved so that you can make and accomplish more.

On your own, you won’t be able to make much of an impact, but as a group – the possibilities are limitless! Power in numbers I say!

Start a knitting club and gather a posse full of yarn loving peeps! 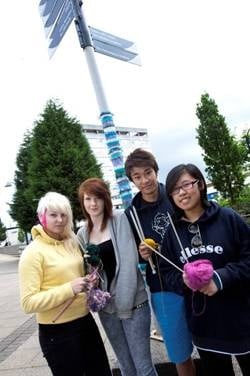 Find some inspiration from other yarn bombers, there are so many around with fantastic work, you will have many ideas.

In our knitting club, we looked at local work and knitted work on the internet before we got started.

Many of our yarn bombers were beginners, so learning to knit was their main goal while experimenting with different yarns and textures.

Some knitted lengths were various shapes and sizes, all adding to the fun of the project! 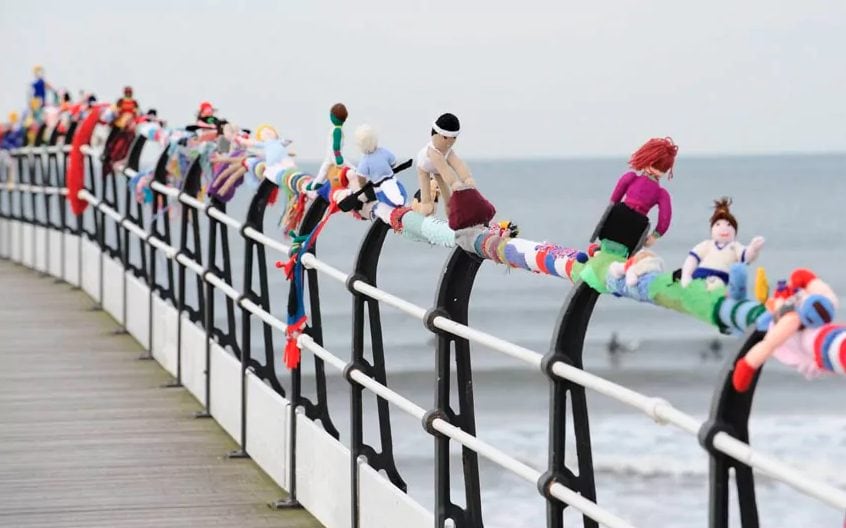 Choose a place where your yarn bombing will be appreciated – like a monument or somewhere that needs cheering up.

You can have a lot of fun with this, leaving knitted presents on cars (like the Principal of a college!) or to decorate trees or lamp posts, anything goes really! 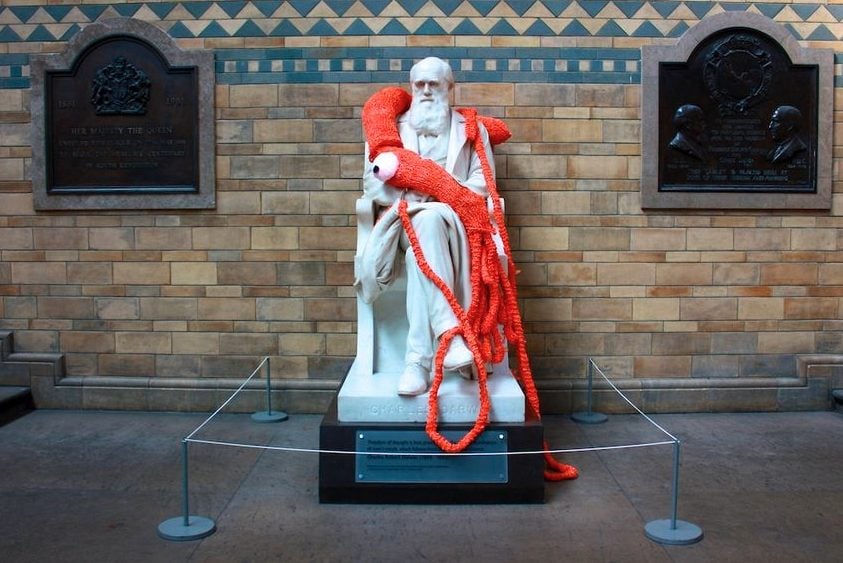 Make sure you have the right sizes for the place you are going to – there’s nothing worse than a piece that doesn’t fit!

So do a little planning before your knitting club gets down to business.

Take photos, even measure if you can, so that you can plan your makes.

A yarn surprise from the Newcastle College campus.

If it’s a place that you know it might be taken down the moment it has been noticed, try and get permission before, from whoever owns the premises.

When we yarn bombed the college a few years back, we had to ask permission from the big boss, as it would have all been taken down if we hadn’t.

Obviously, in the city or somewhere public, you can leave a knitted piece, like a scarf and someone might take it to keep with them – because they love it so much!

To be a successful yarn bomber with an element of surprise you need to set up your makes under some sort of secrecy!

Going at night or in the early hours of the morning are a good way to make sure nobody knows what’s going on.

We turned up at 6.30 am to set up on the college campus, when we knew it wouldn’t be busy until 8 am.

Then we waited around a little to see if people noticed and enjoyed the moment when people started to go over and feel the knitting and take photographs. 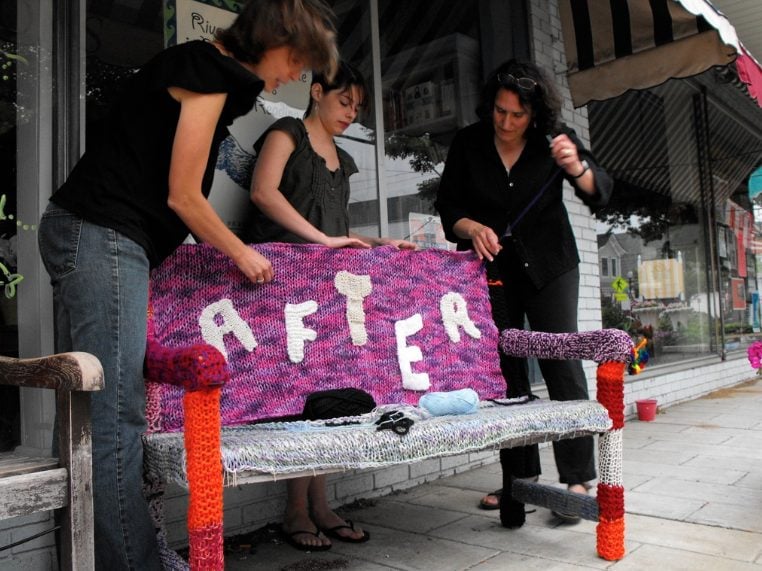 Yarn bombers setting up their work.

Make sure you take cable ties and other supplies you might need like scissors, yarns, extra scraps, stapler, and yes even ladders!

We had a member of the knitting club (secretly known as the yarn bombers) bring six-foot step ladders with them so that we could reach up high.

It was worth it and the work looked really effective. 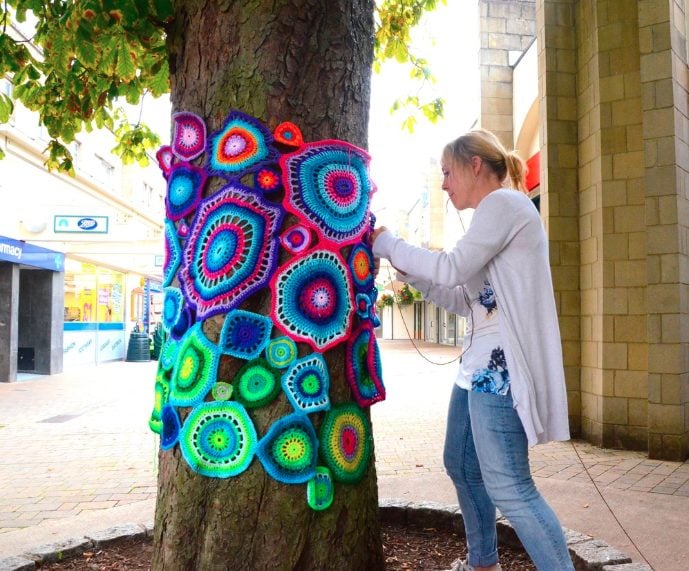 Setting up knitted work on a tree.

Don’t forget to take your knitting posse with you – many hands make light work!

It’s also a good giggle when you are trying to put everything up and look like your not doing anything suspicious! 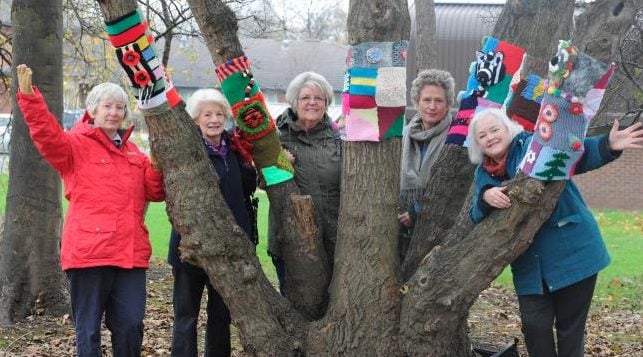 Yarn bombing group getting to work!

Here are a few images of the knitted pieces that mysteriously appeared on the college campus from the knitting club that I used to be in.

they went up early one morning – with help from both staff and students, then after about 1 week, they were removed.

It had rained a little – so many of the pieces were a bit soggy. The students had used any yarns they could find – but acrylic yarn is best. It’s cheap and colourful – perfect for any guerilla knitting!

We did ask permission before and the marketing team absolutely loved it! they took photos of the students wearing hoodies and masks with their knitting needles. 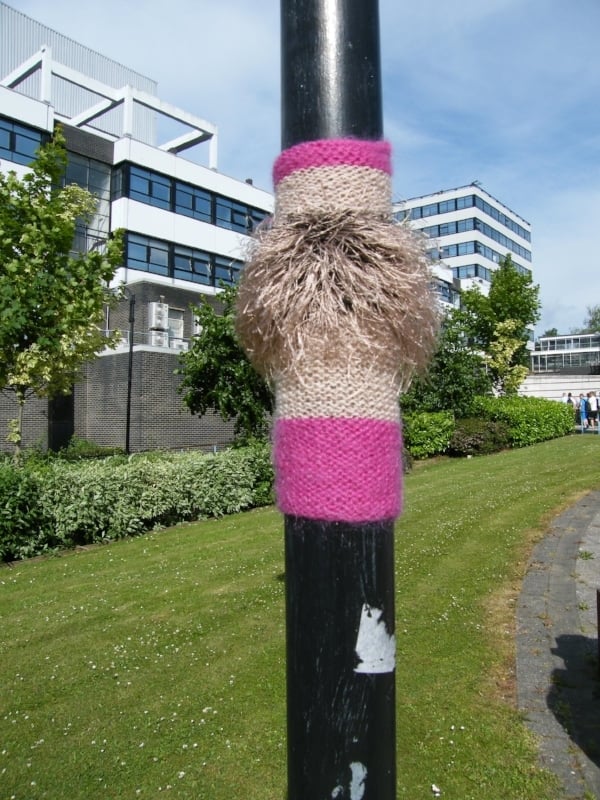 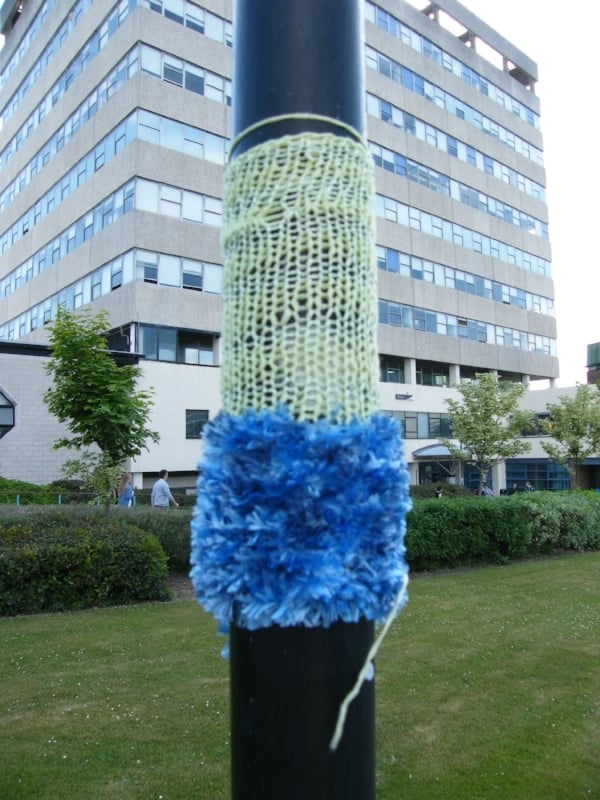 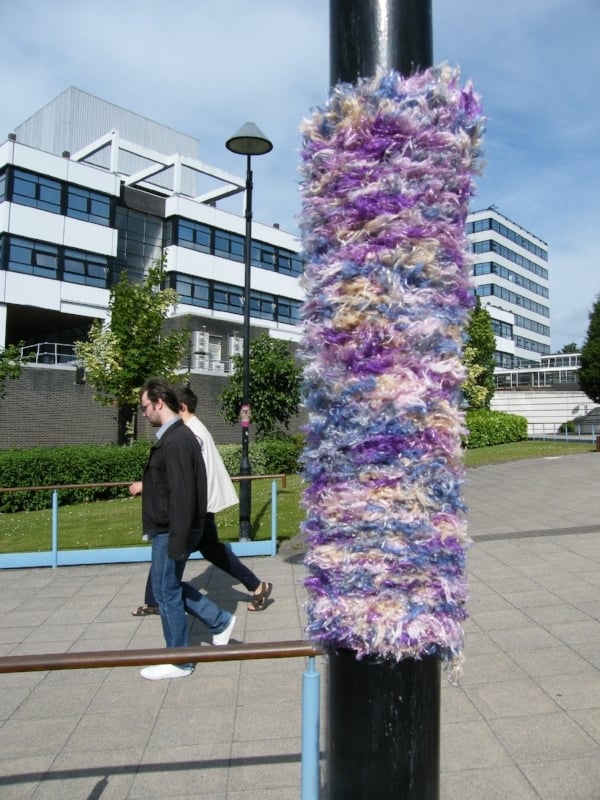 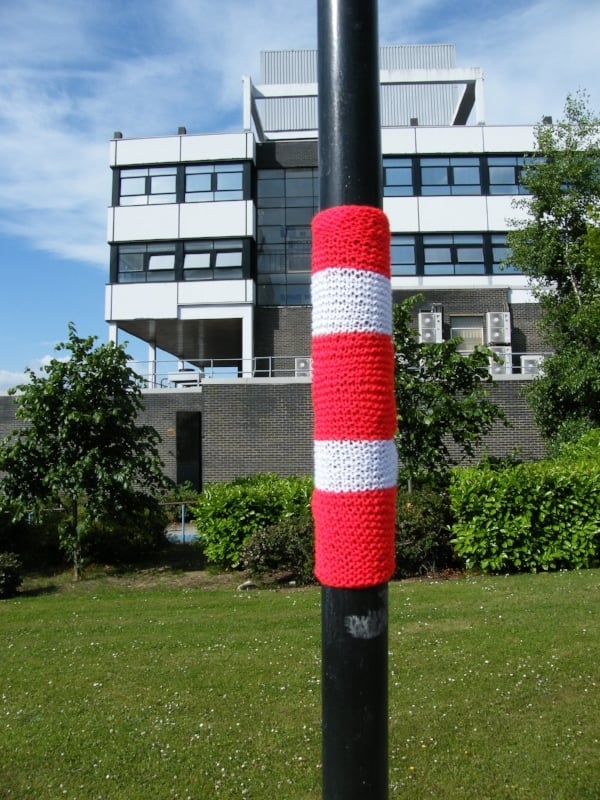 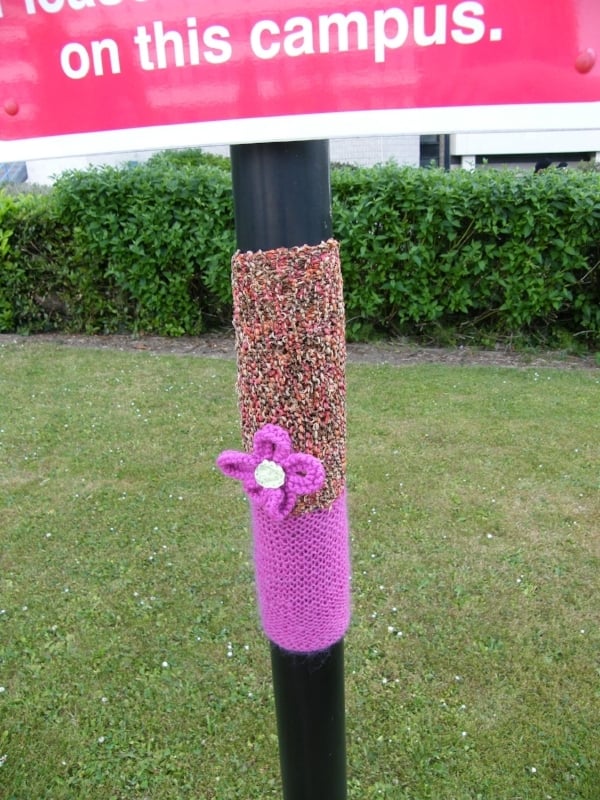 Are you a yarn bomber?

Do you like to leave your work in public places for people to see?

Let me know in the comments below 🙂